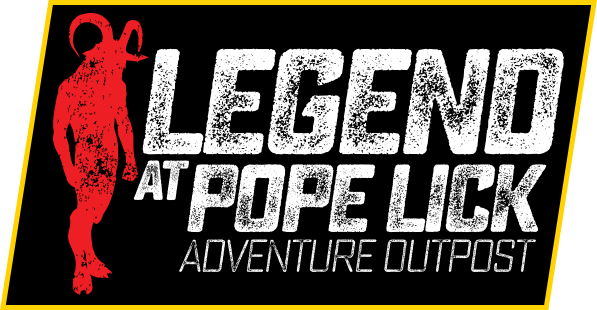 The Legend of the Pope Lick Monster

In every urban legend, there is a cornerstone of truth, and every true story has a beginning— 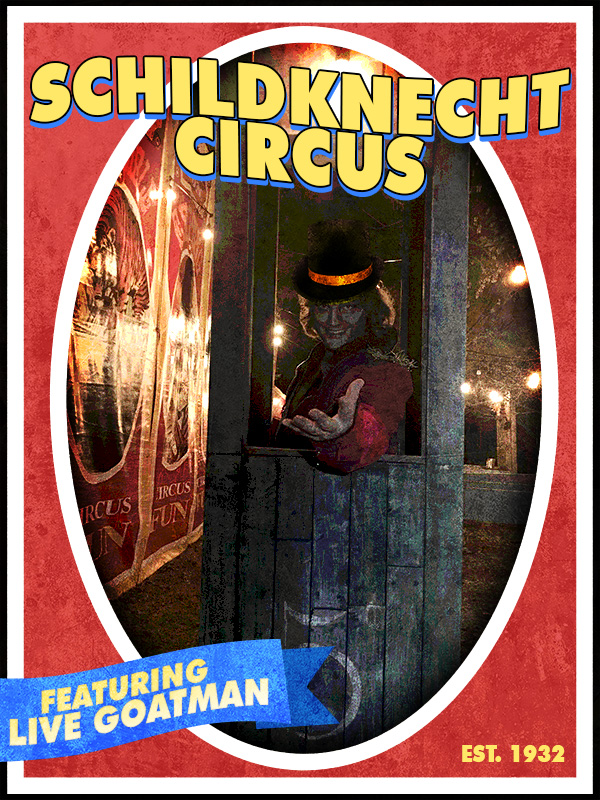 This story begins with a man who called himself Colonel Beauregard Schildknecht, although there is no record of evidence that he ever served in any regiment of the armed services or militia. Colonel Schildknecht was the owner and Ringmaster of a traveling circus that performed across the heartland of America and into the Deep South territories beginning in the early 1930’s. Schildknecht’s reputation was one of ill repute in the carnival business, and he was considered a liar, cheat and all around charlatan. His crew of carnies and circus clowns were more of a gang of cutthroats and pirates than sideshow entertainers, and every town they visited left behind a series of unsolved thefts, missing persons and grizzly accidental deaths.

One thunderously stormy night while stopped in a small town near Beltsville, Maryland, the circus’ bearded lady, Madame Bristelles, discovered an abandoned infant left in a hay filled crate outside her tent. The child was severely malformed with stubs protruding from its forehead and misshapen legs that ended in what looked more like cloven hooves than human feet. She took the poor creature in and gave it food and shelter.

One look at the twisted abomination and Colonel Schildknect knew that he had struck gold. He had found the starring attraction for his Freak Show that would make him rich beyond his wildest dreams. He took the child and raised it in captivity, never letting it out of his sight or its cage until it could be fully exploited for its grotesque appearance.

The beast grew in size and strength over the years, its stubs becoming full sized horns and its temperament as nasty as the treatment given to it by the cruel circus carnies charged with keeping it imprisoned. It spent most of its life chained to the wall of a cage inside a circus train, whipped brutally daily to keep it subdued and submissive, and fed only gruel and leftover scraps from the Midway vendor’s grease pits.

One fateful night, during a thunderstorm as violent as the one on the night of its birth, the circus train was passing through Fisherville on its way to a performance in Louisville, KY when a bolt of lightning struck the tracks causing the train to derail just ahead of the trestle over Pope Lick Creek. The twisted wreck probably killed most of Schildknecht’s crew instantly, but not all of them, since body parts were found as far away as two miles from the crash site.

It is believed that the Goatman survived the tragic train wreck... 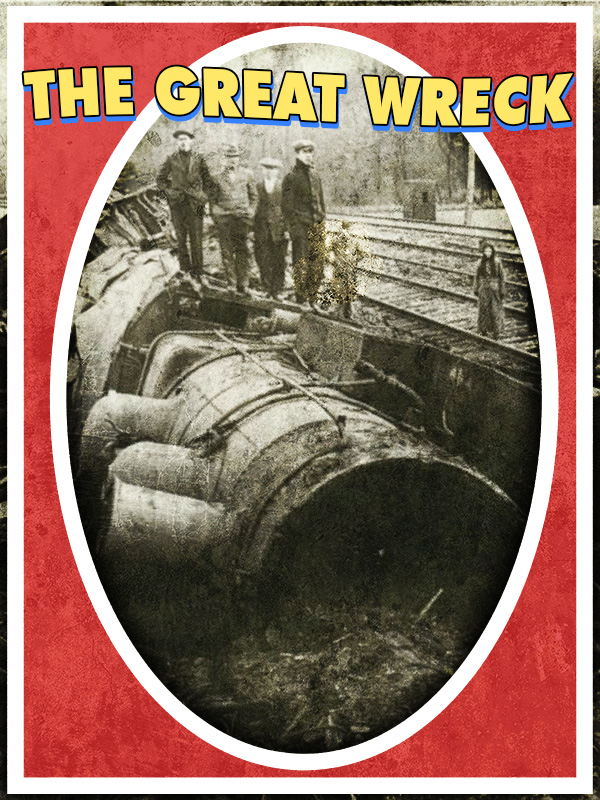 Finally set free from its life of torture, exploitation and imprisonment, and it took revenge on the survivors by ripping them to bloody shreds. Colonel Schildknecht’s body was never found, and it is suspected that a few of his cutthroat crew of clowns, circus freaks and dangerous animals also may have survived the deadly accident, but were never found.

Due to the number of deaths, missing persons, deer & livestock mutilations and Goatman sightings that have been reported in the ensuing years, there is good reason to believe the Goatman of Pope Lick never left the area. He is believed to have taken up residence in either an underground cave or ramshackle hut somewhere in the wooded area near the train trestle. His inbred hate of cruel humanity has made him a bloodthirsty and dangerous beast to be avoided at all costs.

Those that dare trespass into the Goatman's domain have met their fate at his hands. There are a number of confirmed deaths, and many injuries and close calls, attributed to the Pope Lick Monster and his protected trestle. The trestle rises 90 feet above Pope Lick Creek and stretches 772 feet across to the other side. Although incapable of human speech, the Goatman is said to be able to mimic human voices and has been known to call out the names of those who have climbed to the top of the trestle in order to lure them out onto the tracks just as an oncoming train is coming around the bend to seal their doom.

The Goatman is said to be most active in the woods and hills surrounding the Pope Lick Trestle...

Those who have attempted to drive beneath the trestle at the stroke of midnight have reported being chased by the beast, who can run at speeds of nearly 60 miles per hour, and more than one report has claimed loss of their car door handle or bloody claw prints left on their car door after the pursuit.

In the mid 1970’s, rumors of a cult and rituals began circulating in the same area along Pope Lick Road, and reports of missing dogs, cats and other domestic animals were suspected of falling prey to blood ceremonies. A mysterious farm known as The Four Winds down the street a few miles from the train trestle was suspected of being owned by a cult who worshiped the Pope Lick Monster as the living embodiment of Baphomet, the Goat of Mendes himself. The Four Winds was surrounded by a red and black painted fence through the 1980’s and into the 1990’s with a sign at the front gate warning “Trespassers Will Be Persecuted.” Strange tribal drum beats and chanting were often heard in the woods behind the farm’s barn.

It is believed that the Four Winds was made up of local farmers who dabbled in the dark arts. The cult revolved around a family of farmers who shunned outsiders and cast spells to protect their farmland. Legend has it that anyone who wronged the family would be visited by a half goat, half human monster named Capra that was summoned to exact savage vengeance on the wrongdoer and to protect the family from all other outside evil influences. If you encounter this family of farmers in the area, proceed with caution and respect! 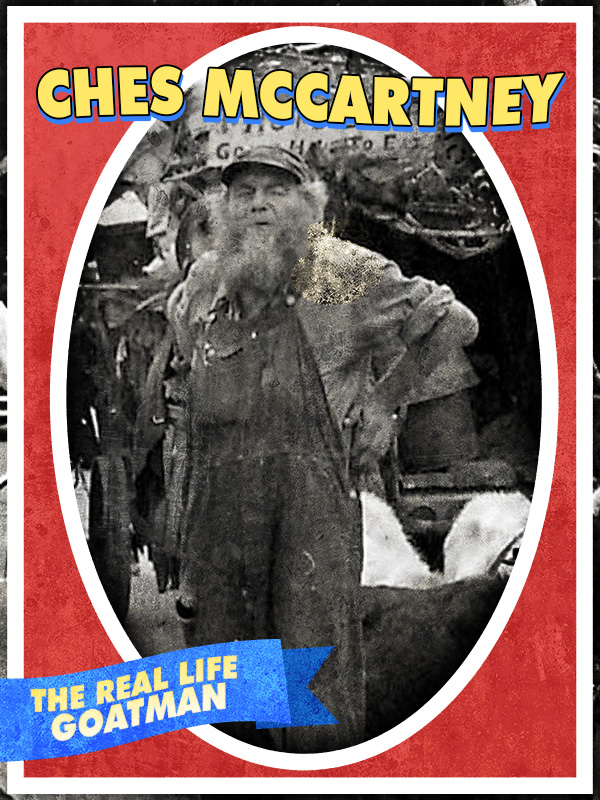 A Family Tree that started it all…

One of the most credible theories about the origins of the Pope Lick Monster is the story of Charles “Ches” McCartney, a nomadic traveler and occasional fire and brimstone preacher who traveled up and down the Eastern United States from 1930 to 1987. McCartney traveled the backroads of the country in a ramshackle wagon pulled by a team of between nine and fifteen goats and would cause quite a stir in every town he stopped in and set up camp. People would come from all over town to visit the real “Goat Man” and his horned entourage. Historical records show McCartney stopped regularly at Pope Lick near the train trestle and the Four Winds farm over several decades. It is believed that his family lineage may have lived on in the area. It is also believed that McCartney may have had a relationship with the Madame Bristelles whom was credited with the discovery of the Goatman.

By all accounts, Ches McCartney was a master storyteller and was known to weave quite a tale to curious visitors. One of his most popular local tales involved his secret knowledge of an ancient graveyard hidden somewhere in the woods just beyond the Pope Lick train trestle. According to McCartney, the ground beneath the cemetery was cursed by some evil power. Any corpse buried in that wretched earth would be resurrected as an obscene creature neither human nor beast, but a monstrous amalgamation of both. It is now believed that McCartney’s story may be the first campfire tale of Capra.

The Legend of the Pope Lick Monster and the haunted railroad trestle it calls home have been passed down through the oral tradition and spread about over three generations of Louisville culture. Is it all myth and urban legend or are some of the stories rooted in truth and local history?

This fall, visit the Legend at Pope Lick and discover the legend for yourself!

WARNING: The Pope Lick trestle is an operating railroad bridge with frequent train activity. Do not attempt to climb and/or cross the Pope Lick railroad trestle. Trespassing on the property is punishable by law and extremely dangerous. Legend at Pope Lick Haunted Woods and the Parklands at Floyds Fork do not condone any illegal activity associated with the Pope Lick trestle.